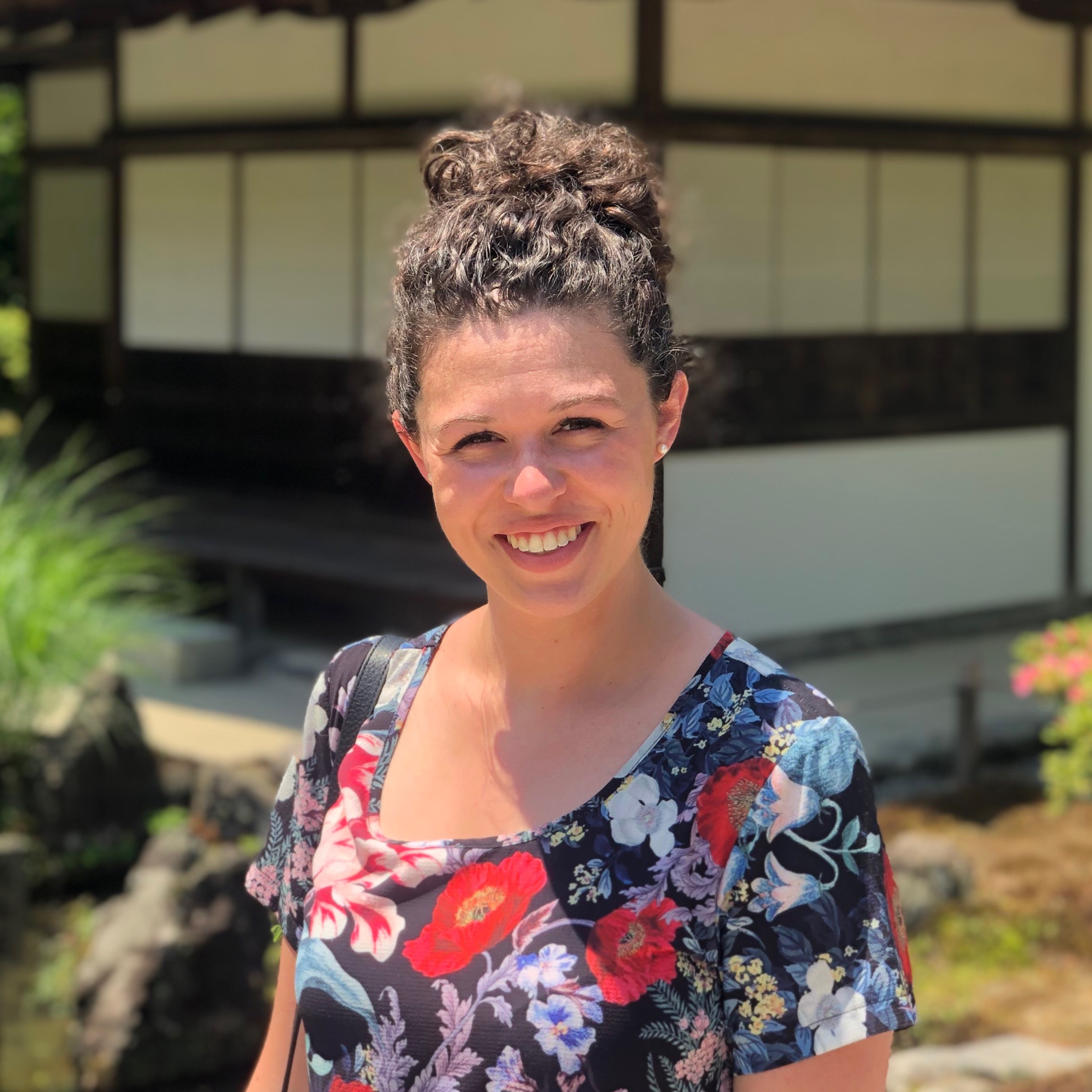 The conception of elections as a critical link between legislators and the interests of their constituents dates back to Federalist No. 10. In his essay, James Madison argues for a model of government where representatives advocate for their district’s needs and communicate local preferences. Fast forward to the mid-20th century; seminal works in political science also detail elections in this way. In their descriptions of campaigns for the House of Representatives, Fenno (1978) and Mayhew (1974) emphasize that successful candidates for Congress champion policies and positions important to their specific constituencies. Drawing on these accounts, the archetypal—and maybe even ideal—House candidate is one who tailors her campaign and subsequent legislative behavior to best fit her unique district.

Modern candidates for Congress, however, appear to employ an altogether different approach to campaigns, eschewing Madison’s template. In 2018, for example, politicians framed the upcoming midterms as a referendum on the president and his party. Contentious national issues, from the the state of the southern border to the availability of quality healthcare, were at the core of U.S. House campaigns. Republicans touted a healthy economy while emphasizing the importance of conservative immigration reform. The Democratic Party, in a year of unprecedented campaign spending, poured nearly $125 million dollars into party messaging on healthcare alone. These campaign appeals had their desired effect. According to Pew Research Center (2018), both Democrats and Republicans placed immigration and healthcare among the top issues guiding their vote in 2018. In today’s ``nationalized” elections, it would seem that parties offer voters the same choices throughout the country, with each candidate in each district running on the same party-driven platform.

I argue that this understanding of modern campaigns for Congress misses the mark. In my dissertation I demonstrate that—even though House elections attend more to national issues than before—candidates still often “go local.” To that end, I show that existing theories of strategic candidate behavior must be updated to better reflect what locally oriented campaigning looks like in today’s era of nationalized politics. Rather than considering campaigns as either national or local, I conceptualize nationalized and locally oriented campaigns as opposite ends of a spectrum of choices. I argue that many candidates adopt national party positions while also highlighting local concerns. For some candidates, this may mean discussing district-specific policies alongside national party positions. For others, a locally oriented campaign strategy may look entirely different. Even if today’s campaigns are nationalized, candidates still have significant latitude in which party issues they cover and how they frame these issues. Gathering the data required to assess House campaign issue agendas is a monumental task. To assess campaign strategy in modern elections, I have collected an original data set of text from campaign websites for all congressional primary election candidates in 2018 who had an official campaign site. I am currently in the process of collecting text for the 2020 primary elections. I also plan to find, aggregate, and clean website text for a select set of candidates who ran in the 2010-2016 elections. These data are unique in that they provide a near complete picture of modern campaigns for Congres. Once completed, this collection of nearly 5,000 campaign platforms will constitute the first comprehensive collection of text on congressional candidate issue agendas.

I suggest several different ways candidates “go local” in modern campaigns. First, I investigate under what conditions House candidates adopt local issues into their platforms. I consider national issues to be those broad, party-inspired platform points that apply generally to the country as a whole. Local issues, on the other hand, are policies that address needs unique to a specific district. These are the kinds of platform issues recalled by early elections scholars that, according to some accounts, have disappeared from campaigns altogether. My cursory findings suggest that local issues are still present in today’s campaigns but their adoption is mostly limited to two-party competitive districts. Running as a D or R in these races is a liability rather than an asset. Moderate voters—who are vital to winning competitive races—can be put off by candidates who place the party they belong to ahead of the people they want to represent. Running on local issues, then, may win over these centrist voters by demonstrating a commitment to the district. In 1970, over 40 percent of districts were considered competitive. Today, a paltry 10 percent of districts fall into this category. I contend that increasingly safe districts are partially to blame for today’s nationalized campaigns. 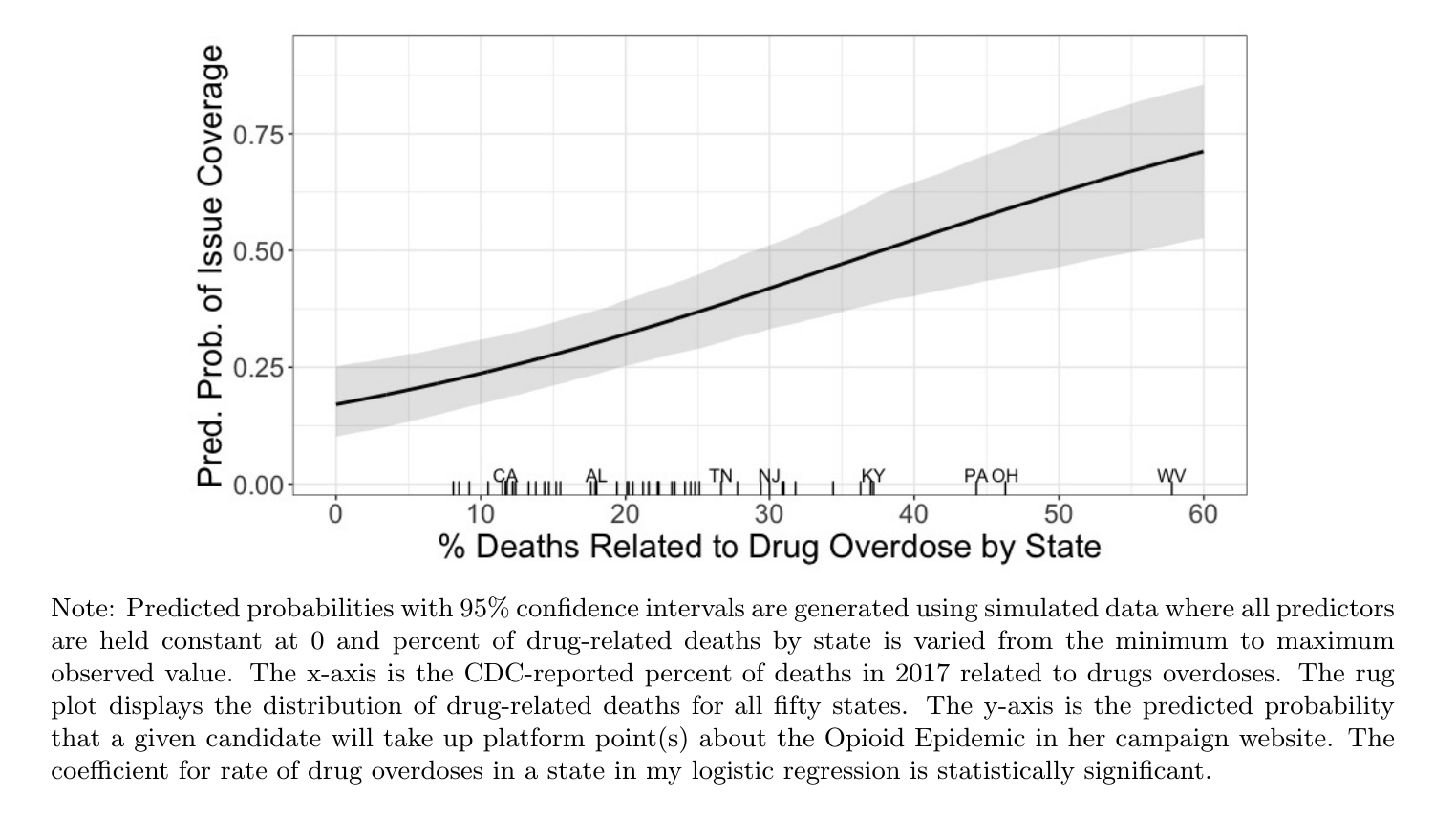 My analyses also show that the “national” issues in a candidate’s campaign platform may actually be less nationalized than they appear at first blush. I argue that, in some instances, candidates “go local” through the rhetoric they use to discuss nationally important issues. Once again, district conditions affect these candidates’ decision-making. I investigate when and how Republican primary candidates adopted policies related to opioid abuse (illicit or otherwise) in their 2018 campaign platforms. This issue is uniquely suited for my research question. The Republican Party has historically stood by strict legal enforcement and the reduction of drug trafficking as the best means to fight the War on Drugs. Therefore, if candidates today run exclusively “nationalized” campaigns, Republicans should toe the party line and be tough on crime regardless of their state’s rate of drug overdoses. Contrary to expectations, I find that Republicans in 2018 were significantly more likely to take up policy positions about opioid abuse if their state had a high rate of overdose-related deaths. These results are briefly summarized in the figure above. My preliminary analysis shows that a candidate’s likelihood of talking about opioid addiction on his campaign website increased from about 25% to over 40% when moving from the first quartile (14%) to the third quartile (29%) of state deaths by drug overdose. To determine how Republicans who took up positions related to drug abuse talked about these issues, I employ an automated form of content analysis called structural topic modeling (STM). In my analysis, this model identifies the types of “subtopics” that candidates addressed in their drug-related platform text. I present the results for this model in the figure below. My findings demonstrate that candidates in districts with high overdose rates were far more likely to “go local” and deviate from their party’s position, dedicating 30% more of their platform text to the subtopic of Prevention than other Republicans. Conversely, candidates from districts with low overdose rates tended to use boilerplate party language and were more likely to discuss the Drug Trafficking subtopic.

To bolster my existing results, I plan to expand on this study by using data from the 2020 election. Analyzing platform text for Democrats and Republicans, I will assess if and how COVID-19 outbreak severity influenced candidates’ framing of issues like unemployment and welfare. Using campaign websites to determine candidate positions on public health will provide much-needed insight into the ways congressional hopefuls might vote as legislators, allowing the public to hold these politicians accountable for “out-of-step” positions. Misinformation about COVID-19 has also run rampant over the past several months and, more than occasionally, this “fake news” has been propagated by political elites. Campaign websites could provide intuition for why some candidates tout false information and other do not.

In my dissertation, I also demonstrate that candidates “go local” by reacting to their same-party competition in the primary. In 2018—an election known as the “Year of the Woman”—only half of Democratic male candidates included platform points related to women’s equality in their campaigns. Male Democrats’ adoption of these issues seems surprisingly low, especially in the wake of national events like the Women’s March and #MeToo. Coupling my text data with matching methods for causal inference, I try to account for this dissonance. I posit that Democratic men were not responding to the national political climate in their uptake of women’s issues in 2018 but, rather, were responding to their district’s local conditions—namely the presence of a female candidate in their primary. To estimate the causal effect that a female candidate’s presence has on her male competitors’ issue coverage, I would ideally randomize the assignment of Democratic women to primary elections. With observational data, however, such an approach is not possible. Establishing causality using observational data is challenging because we cannot observe the counterfactual. For my purposes this means that, while I can observe the platform composition for candidates who ran against a women (the factual), I cannot observe under identical electoral conditions what issues those same candidates would have covered if a woman had not run in their primary (the counterfactual). Covariate balancing is a non-parametric method for data pre-processing that tries to ameliorate this issue by assigning weights to observations before model estimation so that—aside from treatment status—the non-treated group (men who did not run against a woman) is as similar as possible to the treated group (men who ran against a woman). In this way, covariate balancing aims to adjust the non-treated group such that it can serve as a counterfactual comparison for the group of treated observations. 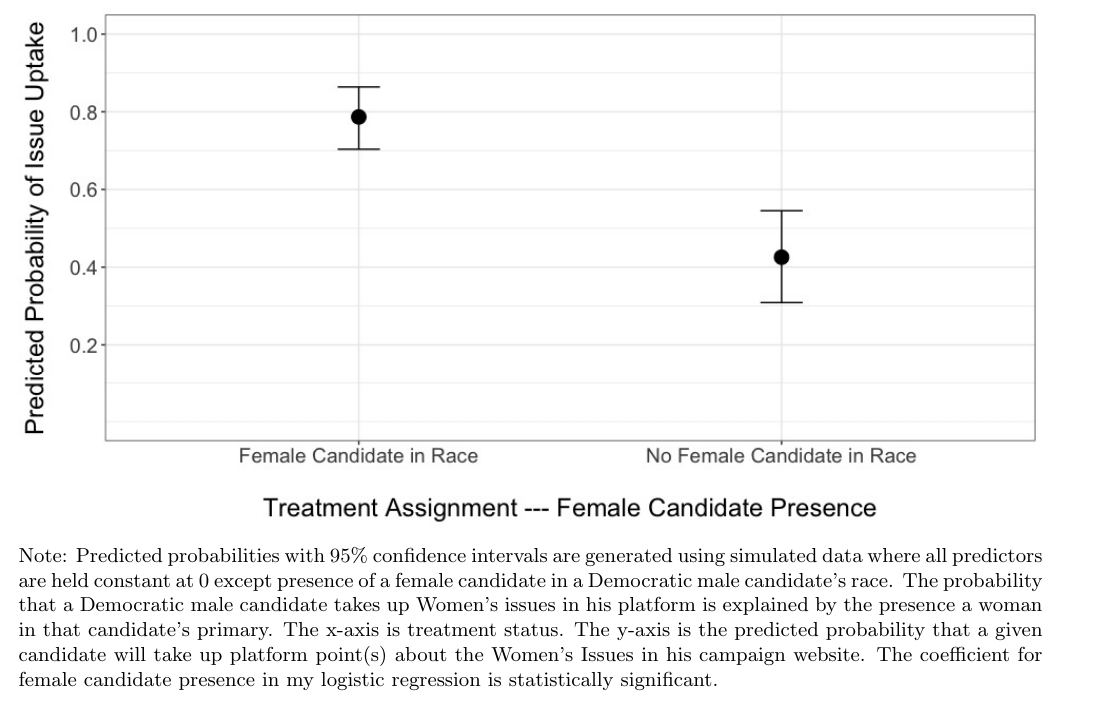 Employing these weighted data in a logistic regression, I find support for my expectations. It was not the national salience of women’s issues in 2018 that prompted Democratic men to take up female-related polices but, rather, whether or not these men were running against a woman in their own primary election. Predicted probabilities for this models are presented in the figure above. I show that Democratic men who ran against a woman were nearly 40% more likely to cover women’s issues in their platforms than those who did not run against a female. Applying this same approach to civil rights issues (i.e. Black Lives Matter, voting accessibility, police brutality) and black candidate emergence in 2020 will provide an excellent secondary case for this analysis. The importance of broadening political discussions around diversity—whether these be in-person or online—cannot be understated. My work shows that diverse candidates not only improve representation through their own presence in elections, but also motivate other candidates to take up issues related to their diversity.